1. Change the sentences according to directions.
(a) Once two women quarrelled over a baby, each claiming the baby as her own. (Compound)
(b) As the dispute could not be settled, they were brought to a judge for a settlement. (Simple)
(c) The judge left no stone unturned to solve the problem. (Affirmative)
(d) He also tried his best to make them accept the truth but both clung to their claims. (Simple)
(e) The wise judge then ordered the executioner to cut the baby into equal parts. (Passive)
(f) At this, one woman remained quiet but the other one cried out in sorrow. (Complex)
(g) The real mother did not want to kill her son. (Interrogative)
(h) So, she decided to leave her demand. (Passive)
(i) The fake mother gladly accepted her proposal. (Negative)
(j) Then the judge gave the baby to the weeping mother and punished the other one. (Simple)

Answer:
(a) Once two women quarrelled over a baby and each of them claimed the baby as their own.
(b) Owing to the unsettlement of the dispute, they were brought to a judge for a settlement.
(c) The judge turned every stone/ tried his best to solve the problem.
(d) In spite of his trying best to make them accept the truth, both of them clung to their claims.
(e) The executioner was then ordered to cut the baby into two equal parts by the wise judge.
(f) At this, one woman remained quiet while the other cried out in sorrow.
(g) Did the real mother want to kill her son?
(h) So, it was decided by him to leave her demand.
(i) The fake mother did not sadly accept his proposal.
(j) Then giving the baby to the weeping mother the judge punished the other one.

2. Change the sentences according to directions
(a) Man is the most intelligent creation. (Positive)
(b) He uses time intelligently. (Negative)
(c) He has to make division of time to do his work properly. (Complex)
(d) If he works sincerely, he can succeed in life. (Compound)
(e) An active man always uses his time for a productive purpose. (Negative)
(f) To him time is money. (Complex)
(g) He knows that time once gone is gone forever. (Passive)
(h) He cares for none in using his time. (Interrogative)
(i) Since time does not wait for us, we should not waste away it. (Compound)
(j) A time killer has to repent in the long run. (Complex)

Answer:
(a) No other creation is as/ so intelligent as man.
(b) He doesn’t use time foolishly/ unintelligently.
(c) He has to make division of time so that he can do his work properly.
(d) He works sincerely or he cannot succeed in life.
(e) He wants to succeed in life and so he works sincerely.
(f) An active man never uses his time for an unproductive purpose.
(g) It is known to him that time once gone is gone forever.
(h) Does he care for anyone in using his time?
(i) Time does not wait for us and so we should not waste away time.
(j) The person who is a time killer has to repent in the long run.

3. Change the sentences according to directions.
(a) Optimism is a great quality. (Compound)
(b) It leads one to be happy. (Passive)
(c) Only the optimistic are accepted by all. (Negative)
(d) We all should be optimistic about life. (Complex)
(e) There are not many who are optimistic. (Affirmative)
(f) In fact, all can’t be optimistic. (Interrogative)
(g) We can attract the attention of others when we are optimistic. (Simple)
(h) Optimism is one of the greatest qualities. (Comparative)
(i) It is a very vivid quality. (Exclamatory)
(j) Who does not believe this truth? (Assertive)

Answer:
(a) Optimism is a quality and it is great.
(b) One is led to be happy by it.
(c) None but the optimists are accepted by all.
(d) It is life about which we all should be optimistic.
(e) There are few who are optimistic.
(f) Can all be optimistic in fact?
(g) We can attract the attention of others being optimistic.
(h) Optimism is greater than most other qualities.
(i) What a vivid quality it is!
(j) Everybody believes this truth.

4. Change the sentences according to directions.
(a) Cricket is one of the most exciting games in the world. (Make it positive degree)
(b) The cricketers of Bangladesh are called ‘Tigers’. (Make it active voice)
(c) Tamim Iqbal is a very dynamic player of Bangladesh. (Make it negative sentence)
(d) Though he got a serious injury in Asia Cup, he accompanied Musfiqur Rahim with one hand. (Make it simple sentence)
(e) People all over the world know Mashrafe Bin Mortaza as ‘Narail Express’. (Make it passive voice)
(f) Mustafijur Rahman is called the Cutter Master in cricket world. (Make it complex sentence)
(g) Shakib-Al-Hasan is not only a batsman but also a bowler. (Make it affirmative)
(h) As they played well in the last World Cup, they gave pleasure to the fans. (Make it simple sentence)
(i) By practicing more and more, they will win the World Cup in future. (Make it compound sentence)
(j) Musfiqur Rahim made a very excellent century in Asia Cup 2018 against Sri Lanka. (Make it exclamatory sentence)

Answer:
(a) Very few games in the world are so exciting as cricket.
(b) People call the cricketers of Bangladesh ‘Tigers’.
(c) Tamim Iqbal is not at all an apathetic player of Bangladesh.
(d) In spite of getting a serious injury in Asia Cup, he accompanied Musfiqur Rahim with one hand.
(e) Mashrafe Bin Mortaza is known as ‘Narail Express’ by people all over the world.
(f) It is Mustafijur Rahman who is called the Cutter Master in cricket world.
(g) Shakib-Al-Hasan is both a batsman and a bowler.
(h) They gave pleasure to the fans by playing well in the last World Cup.
(i) They will practise more and more and win the World Cup in future.
(j) What an excellent century Musfiqur Rahim made in Asia Cup 2018 against Sri Lanka!

6. Change the sentences according to directions.
(a) Traffic jam is the most serious problem in Dhaka city now. (Compound)
(b) It has become a common affair in most of the cities and towns. (Negative)
(c) Sometimes this jam is so acute that it blocks more than a kilometer of a street. (Compound)
(d) It kills our valuable time. (Passive)
(e) By taking some pragmatic steps we can solve this problem. (Complex)
(f) More wide roads can be constructed. (Active)
(g) Law should be implemented to ensure punishment. (Complex)
(h) Drivers who are experienced should be given license. (Active)
(i) Public awareness is more important than any other step. (Superlative)
(j) Then life in Dhaka city will be very enjoyable. (Exclamatory)

Answer:
(a) Traffic jam is the most serious problem and it is in Dhaka City now.
Or, It is traffic jam and the most serious problem in Dhaka City now.
(b) It has not become an uncommon affair in most of the cities and towns.
(c) Sometimes this jam is very acute and it blocks more than a kilometer of a street.
(d) Our valuable time is killed by it.
(e) If we take some pragmatic steps, we can solve this problem.
(f) The Government/ Authority/ road constructors can construct more wide roads.
(g) Law should be implemented so that it can ensure punishment.
(h) Experienced drivers should be given license.
(i) Public awareness is the most important step.
(j) Then how enjoyable life in Dhaka city will be!

7. Change the sentences according to directions.
(a) Nothing comes of nothing? (Affirmative)
(b) When did you seek for me? (Negative)
(c) She told me something and I did not understand it. (Simple)
(d) Usually, I hate doing all these. (Compound)
(e) The fact what you described was not truer than that she explained, (Positive)
(f) Let me make it sure whether somebody follows her, (Passive)
(g) Bangladesh should educate English and ICT to all her people otherwise she cannot hope to be able to be digitalized. (Complex)
(h) They could not reach the station in time since the weather was extremely rough. (Simple)
(i) The effect of the pollution affected environment contains a lot of miseries and sufferings for the unfortunate common people living in the world ( Passive)
(j) One should take care of one’s health. (Passive)

Answer:
(a) Things come of things. Or, Something needs to come of something.
(b) You never sought for me.
(c) I did not understand her telling me something.
(d) I hate doing all these and it is usual.
(e) The fact what she explained was as true as that that you described.
(f) Let it be made sure be me whether she is followed.
(g) Bangladesh can not hope to be able to be digitized unless she should educate English and ICT to all her people.
(h) The weather being extremely rough, they could not reach the station in time. Or, They could not reach the station in time for the extremely rough weather.
(i) A lot of miseries and sufferings for the unfortunate common people living in the world are contained in the effect of the pollution-affected environment.
(j) Health should be taken care of. 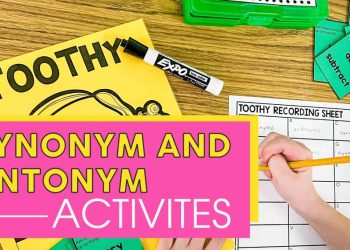 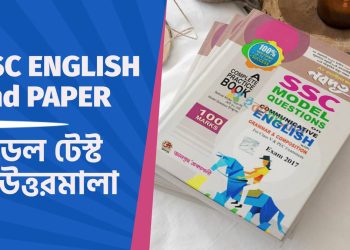 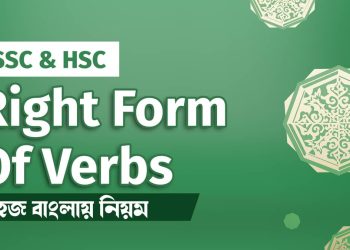 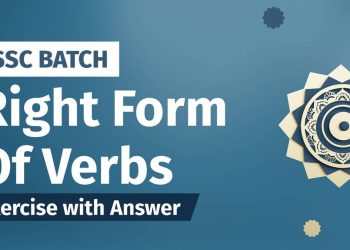 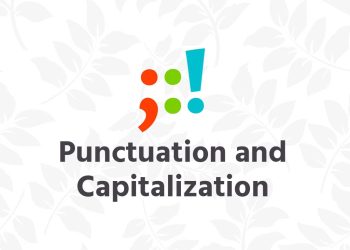 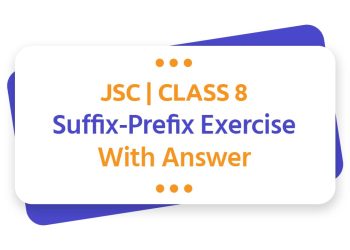 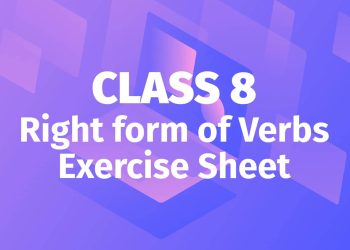 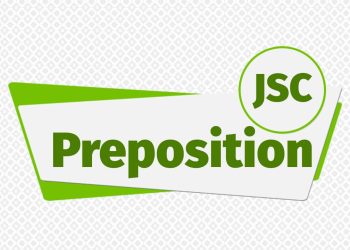